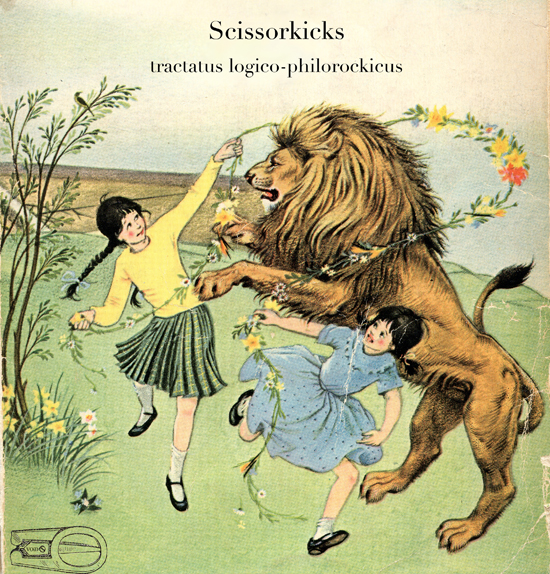 Scissorkicks Tractatus Logico-Philorockicus (Void)
Call Scissorkicks iconoclastic if you must, but don’t think Scissorkicks won’t hold it against you. Tractatus Logico-Philorockicus, this Scandinavian trio’s sophomoric first album, is antagonism from front to back—but it’s damn gracious antagonism. You wouldn’t think a group consisting of guitar, harpsichord, and cooing vocals (no bass, no drums, no production tricks) could bring on any actual discomfort, but “Samsara,” with its sickly contrapuntal harmony and puzzling lyrics about milking cows, should contradict you amply. Or “Praxis,” an amalgam of Gordon Lightfoot’s lilting troubadourship and that scary-ass cackling ghoul from David Lynch’s Lost Highway. This is profound, and profoundly odd, shit.
But any chump can twist your arm until you twitch and squirm (and Scissoricks do, particularly with mid-album ditty “Twitch and Squirm”): what truly anchors Tractatus’s charm and curiosity is its flagrant misanthropy. It sounds innocuous, until Olaf Byrnquist sings “I know you want to know what I’m thinking/ I’m thinking about misogyny,” or until sopranino Margot Quistgaard chirps, ad infinitum, “You don’t know what to say/ But I’m sick of us anyway.” With lyrics always just too sharp and sly to count as gloomy, and an indomitably idyllic sound (think Donovan on shrooms), Tractatus profits from its incongruity—which in turn sustains it through a handful of duds (including “Naughty Lars,” a song about a man-maiming alpaca).

Byrnquist and Quistgaard’s musical backgrounds—stints with math-rock oddballs Smaklig Måltid and Polish ska-punk titans Polska—hardly fit in with a sound as courtly and unorthodox as that of Tractatus, but this too just adds to that odd cloud of charisma surrounding Scissorkicks. (Harpsichordist Ian Clark, for his part, has no known musical affiliations at all; rumor has it Quistgaard found him playing at a jousting championship during a trip to Norway.) Byrnquist winks wryly at this history on “Why You Should Stop Trying,” probably Tractatus’s standout track: “Stop apologizing, stop touching my hand/ Go back to Finland and start a pop band.”
With its copious witticisms and its all-around cryptic approach to pop, Tractatus is as invigorating as it is difficult to classify. Idiots and formalists might hazard a comparison to compatriots Shout Out Louds’ Howl Howl Gaff Gaff without so much spirit, but Scissorkicks’ combination of winning cynicism and skin-crawling musicianship push any such affinity out of hand. For most taciturn folk acts candor is a coffin nail, but it’s a formula that works magic on Tractatus Logico-Philorockicus, showing that brutal solipsism can hold its own against compassion any day. Thank Scissorkicks for cultivating such a cordial way of victimizing you.
Daniel Levin-Becker Yale Herald March 31, 2003